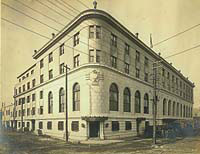 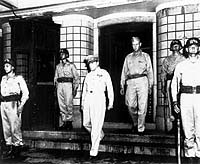 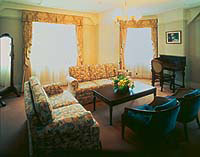 We cannot tell the history of the Hotel New Grand without mentioning the American General MacArthur. Eighteen years after the hotel opened, World War II ended and the US occupation began.
On August 30, 1945, General MacArthur arrived at Atsugi Air Base wearing dark sunglasses with a corncob pipe in his mouth and no tie.
This is a very famous scene in Japanese history.
At the airport, he read the statement he brought with him, climbed into a passenger vehicle, and drove straight to the Hotel New Grand.

It is said that the Allied army chose Yokohama as their first place to stay because the Hotel New Grand, which had not been damaged in the war, would be an appropriate accommodation for the commander in chief.
At the hotel, Room 315 became General MacArthur's room. This room on the third floor faced the port of Yokohama. MacArthur is said to have told an aide that he liked the room.

General MacArthur stayed only 3 days at the hotel before moving on to the next location, but it was not the first time he had stayed here.
In 1937, as a military advisor for the Philippines, he had accompanied the former President of the Philippines, Manuel L.
Quezon, on his trip to the US. On the way back to the Philippines, the party visited Japan, and MacArthur and his wife Jean stayed at the Hotel New Grand on their honeymoon.

Historic figures from around the world who have stayed at our hotel: